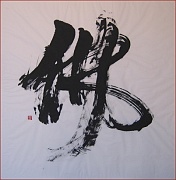 Go to
the Italian page

1. Interior designer and set designer, since 1980 is a professor of planning and art history at Centro Scolastico Industrie Artistiche and at Centro Professionale Trevano in Lugano, Switzerland, where is a member of the Executive Board.
2.  Practices calligraphy since 1993.  Recognized as instructor by  Japan Calligraphy Educational Federation of Tōkyō,  he achieved the 7th  pre dan (準四段).
3.  Followed the teachings of Yamada Tomie, Ruan Zonghua and Nagayama  Norio, Kataoka Shikō, and practiced with other Chinese and Japanese  calligraphers as Tanaka Jomyo, Nagata Otei, Koyama Tenshū. In the  summer of 2008 took a course at the Academy of Calligraphy in  Shaoxing, China.
4.  Instructor of calligraphy for Bokushin Switzerland, until 2008, he is  now instructor for the Cultural Association Shodo.it in Milan, Italy,  founder and instructor of the European Academy of shodo Ruimo.
5.  Director and founding member of the European Calligraphy Confederation and founding member of shodo.it cultural association.
6.  Coauthor and editor of the website www.shodo.it contents.
7.  He organized several calligraphic exhibitions in Switzerland and  Italy.
8.  Wrote many articles and essay concerning calligraphy and far east  art, as in the book “Shodo, lo stile libero” and for the  exhibitions catalogues “The Stolen Character” (Lugano and Milan, 2008), “Shikishi, small size calligraphies”, “Lo Spirito e il Segno” (Milan 2010, Lugano 2011).
9.  Many times invitated to display his work in calligraphic exhibits in  China, Korea, Japan and Europe.
10. He  gives often lectures, workshops and show of calligraphy in various  high schools and universities, cultural associations and schools of  martial arts.